In case you missed it, the legendary OJ Simpson was released from jail after 9 years. They snuck him out at night so that no one would be around to see it. He has promised to lay low and stay out of the spotlight. Some people think that he got away with murder. They might be right, but if so he isn’t the only one… He was in jail for armed robbery (he tried to reclaim his own merchandise) and he did 9 years of a 33 year jail sentence in a Las Vegas prison. OJ was one of those athletes who went from the very top to the very bottom. If he had only kept a low profile after his murder trial he probably would not have been in a Vegas prison. However, OJ’s biggest problem was that he was not very smart. His arrogance made him think that he didn’t have a bulls eye target on his back. He did, and when he went to pick up his belongings he gave the people exactly what they were looking for…. another chance to lock him up. There are people out there who just need to stay out of the spotlight. George Zimmerman is one of them. If he doesn’t keep his mouth closed and lay low they will find a way to put him in prison too. OJ may never get back the positive image he had, but at this point in his life he doesn’t need to. He has money, he has family and he has a reason to keep out of public view. If he wants to stay out of prison then hopefully this time he will do the “smart thing.” Right now it doesn’t matter whether he was found innocent or guilty. He is still one of the most hated men in the United States. Time will tell that story. Thank you for checking out my Daily Thought and as always I wish you the very best that life has to offer.

Dwele in concert with Brett Jolly on bass guitar 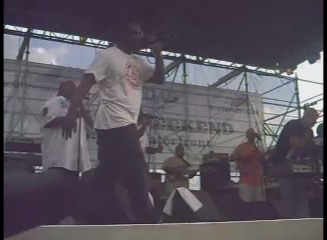 Twenty years later: The OJ Simpson case was revisited. The “Trial of the Century” became an action packed drama series with all the events that took place. For those who don’t remember (or were not born yet) Nicole Simpson and Ron Goldman were murdered at the mansion Nicole lived in. Speculation seemed to point to OJ (who was married to Nicole) as the culprit. When the time came to apprehend OJ he was leading cops on a getaway chase through the streets of Los Angeles during the famous “Bronco scene run” with his passport and a fake beard. The case was made even more famous by a “multitude of police blunders” and “racial tactics” that seemed to make this case almost “unbelievable.” The outcome of this case ended up with OJ being “acquitted of murder charges.” OJ was a football celebrity who was well liked at one point. He was a rich Black athlete who married a young beautiful White woman. As much as this fact should have “nothing” to do with the trial, race because the focal point of the “entire” event. John Cochran was Simpson’s attorney, and he utilized the “race card” to get Simpson exonerated. He claimed that the lead detective, Mark Fuhrman, was a racist who set up OJ by planting bloody gloves at the scene (It was found later that those gloves did not fit OJ). When a recorded tape  emerged of Furhman uttering racial profanities it influenced the jury enough to acquit Simpson. At that point Simpson literally become the “most hated man in America” and with that label he needed to keep a low profile for his own sake. However, he went to a memorabilia auction to regain his own personal belongings and was charged with armed robbery and kidnapping (and he is now serving up to 33 years in prison). Some say that justice finally caught up to him, while others say that justice was finding any way it could to get him. Either way, Mr. Simpson is now behind bars. For me, this case is not about whether he was innocent of guilty of murder. It was more about the rest of us, and how we feel  about interracial relationships, using the race card as a defense tool and whether or not we believe that racist cops would “stage evidence.” It all “sold” to the media, and that was how this became the “Trial of the Century.” I invite you to read up on it and make your own conclusions. OJ is still on the “most hated Americans” list. This story was truly tragic but one thing is absolutely sure: OJ Simpson was “guilty”…. of being “incredibly stupid…” When you literally have a “target on your back” the “last” thing you should want to do is  make it more visible to people who want to take a shot at you. All Simpson had to do was just lay low…  Now he has no choice in the matter. Have a great day, everyone.