Deja Vu. This scene never seems to end. No matter who gets shot or killed we keep having this same recurring nightmare. This time we had 2 of the same situations. A shooter decided to shoot up and kill many people in El Paso Texas. Then 13 hours later a shooter does the same thing to several people in Dayton, Ohio. Why does this nightmare keep recurring in our lives? Because no one has the “balls” to attempt to tackle gun control, background checks and legislation. Instead of doing more “background checks” we are making it “even easier” to purchase guns and just shoot innocent people at random. The interesting part of this is that President Trump shrugs it off by saying that this was done by people who suffer from mental illness. In case you have not heard any of this  here it goes:

https://www.aol.com/article/news/2019/08/04/trump-calls-mass-shootings-a-mental-illness-problem/23787308/
It had been “reported” that “allegedly” the people who did this were White Nationalists. There is a reason why I am mentioning this. Think about it for a second. If this had been done by an illegal immigrant, a Muslim or someone from the countries that Trump has banned from entering our country, there would be a “huge uproar.” If, in fact, these killers were White Nationalists then Trump will probably treat this “differently.” For example, if these killers had been illegal immigrants who entered the country through the Southern border then Trump would have used this issue to push funding for his Southern border wall. If this was done by a domestic White Nationalist then no one knows where Trump can now build a wall to fix this. These are the types of people that support Trump, so it will be “really interesting” to see how he handles this situation. Right now he is blaming it on mental illness. Will he put it in the same category if an illegal immigrant or Muslim does it? Will “anyone” have the courage to tackle the NRA for background checks and legislation? So far they have gotten away with a lot and it seems as though many politicians are “afraid” of them. People with manifestos and personal agendas for killing are finding it “quite easy” to purchase firearms to commit random acts of violence. A lot of politicians are more concerned about the killer’s rights than those of the victims. If this issue is left “unchecked” then a lot more of this will happen. How many of these do we have to deal with before congress finally decides to act on it? Defending ourselves against illegal immigrants won’t protect us at all if the terrorists who inflict harm already live here. Ignoring this will not make it go away. If it is found that these killers supported White Nationalists agendas then we need to look at them the “same way,” and Trump needs to condemn those views instead of shrugging them off as “mental illness.” As a nation we have the power to demand change, and if we cannot get it from certain officials then we need to vote on something (or someone) different. I’m sure that certain people will disagree with this. I am fine with that, but until we take the steps necessary to combat gun control then we will continue to be a nation of victims. We all know what needs to happen. When will our leaders take action? Thank you for checking out my Daily Thought, and as always I wish you the very best that life has to offer.
Anthony Hamilton, Bill Withers and his daughter in concert with Brett Jolly on bass guitar 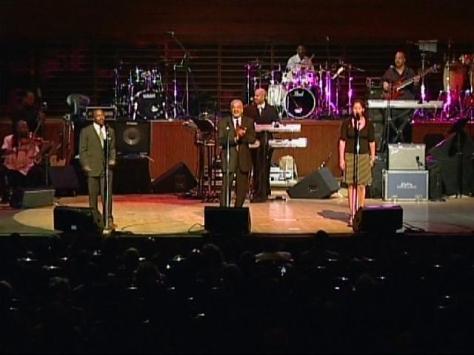