Colin Kaepernick is an ex- quarterback  who has been out of the NFL for 3 years. The main reason he has been out of the league allegedly doesn’t have anything to do with his talents, but rather his “beliefs.” Kaepernick was one of the first 2 players to kneel for the Nation Anthem in protest of police officers killing unarmed Black men. While his position on this should have “nothing to do” with football, he still exercised his right to make a public statement. Nike, the sports paraphernalia  company,  just recently put out an advertisement featuring Kaepernick with a slogan saying. “Believe it something, even if it means sacrificing everything. Just do it.” I “absolutely LOVE” this advertising ploy. It takes a man who has been vilified for his beliefs and now makes him more popular than ever. Many people have sworn off Nike after that ad was launched because they vowed to never support Kaepernick, but who is actually “winning” this public opinion  battle? According to headlines, the Nike ad has been doing “VERY” well, especially with the younger generation (which, by the way, is the generation they should be targeting). President Trump views kneeling during the National Anthem as disrespectful to all those who sacrificed for our country. I have not heard anyone say they used kneeling as a way to disrespect our flag or National Anthem. Here is a recent article showing the strength of the Nike ad:

Freedom of Speech is supposed to be our constitutional right. As long as you are speaking out about something positive, doing great things and not disrespecting our values then you should have the right to speak out.  I won’t be buying any Nike shoes, but that is only because my playing days are over. However, I  highly respect Nike for taking this stance. They have essentially “risked everything” to put their support behind this man and right now it looks as though they made the right choice. While kneeling during the playing of the anthem may seem highly controversial, it doesn’t necessarily mean that it is disrespectful to our country’s values. I am waiting to see if this ad will help to bring on a change of public opinion. The league has blacklisted Kaepernick (and he is now suing the league for that) because the owners have all colluded to keep him from playing football in the NFL.  If the ad plays out right,  then Kaepernick could prove to be more popular than Muhammed Ali in support of his beliefs. I will be paying “very close attention” to this one. Whether you agree or disagree with Colin Kaepernick we all have to admit that his platform is now “gaining steam.” He may never don a NFL uniform again, but he may also become the popular man in sports without ever playing another down. To me, that has more merit. Let’s see how this plays out. Thank you for checking out my Daily Thought, and as always I wish you the very best that life has to offer.

Billy Paul (“Me and Mrs. Jones”) in concert with Brett Jolly on bass guitar 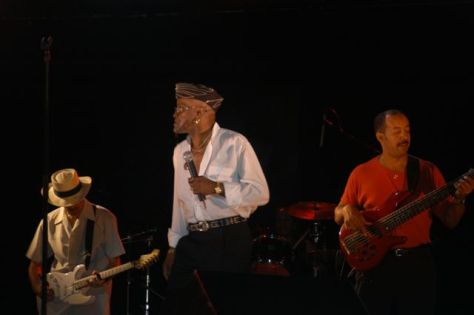