Taleese isn’t a singer or performer. In fact, she admitted that she doesn’t usually take a lot of pictures. However, her birthday was coming up and she felt she needed to have some new ones made. We secured a good day and a great location, and we  hope you like the results. Thank you for checking out my Daily Thought, and as always I wish you the very best that life has to offer.

This song is an old classic which was originally written as a theme song for the circus. The man (or people) who wrote this song were pure geniuses in my eyes. Unfortunately, for the first one minute and 45 seconds there is a lot of unneeded musical fanfare (the real meat of the song starts somewhere around this point) but once the music finally comes in it is a beautifully orchestrated piece that I feel is very underrated. Considering the time in which this song was written I don’t know if they even had access to the use of computers for creating this, but it sounds like something that should have been written under today’s musical standards. Oddly enough, the song is entitled “Computer games” and this is one of my favorite instrumental classics of all time. The group is simply entitled “The Yellow Magic Orchestra.” Thank you for checking out my Daily Thought and as always I wish you the very best that life has to offer.

Don’t forget to wait until the one minute 45 second mark for the main part of the song to come in.

I just recently heard that Presidential hopeful Donald Trump decided to pull out of the “pre-Iowa Fox debate because he didn’t feel he would be treated fairly. Many are wondering if this move will “help or hurt” him. I love to ponder events like this and I came up with my “own” conclusions. First, the people who “already decided” to vote for Trump most likely “won’t change their minds now.” If everything else he said so far hasn’t scared them off, then I highly doubt that what he “won’t say” will change much of anything. Will it help the other candidates who have been lagging behind him in the polls? That will depend largely on how they seize this opportunity. Their chances of being heard and taken seriously should be greatly enhanced without Trump there to steal the spotlight, but the question here is “What can they do with it?”. Here is an article explaining things in more detail:

Trump is not the first candidate to skip a debate. Others have done so and even won convincingly afterwards. Is it “right” for Trump to skip this debate? I can only say this much: If you have aspirations of becoming President you “have to know” that people are going to “come after you.” Donald himself “shot barbs” to President Obama when he ran, often complaining that he was not a natural born citizen of the United States (which was later proven to be unfounded). Trump himself has tossed plenty of negativity towards others (which I think has actually helped him gain leverage and advantage in the polls). He is now supported by Sarah Palin, the “political queen of negativity.” I would not be surprised if somehow she becomes his “Vice Presidential running mate” should he win the nomination. However, in this business if you can “dish it out” then you had better be prepared to “take it.” Mr. Trump has words for everybody, so he needs to expect that people will “punch back.” The fact that he is considered the front runner makes him even more of a viable target. I can’t tell Trump how to handle his candidacy. “No one can.” His blatant disregard for anything that doesn’t agree with him has actually made him “more popular than ever.” Whether you like him or not, he is great entertainment and riding that wave to the nomination. He is like that old Charmin bathroom tissue commercial (the one that stated “Please don’t squeeze the Charmin”). At one point they voted that commercial to be one of the worst commercials ever produced, and yet their sales escalated because of it. Trump’s campaign is following in the same footsteps. You can say what you want about him, but he does not lack for “confidence.” That is what most leaders need to have. The question now is whether or not his confidence has morphed into “arrogance.” Time… and votes… will tell…”  Thank you for checking out my Daily Thought, and as always I wish you the very best that life has to offer. 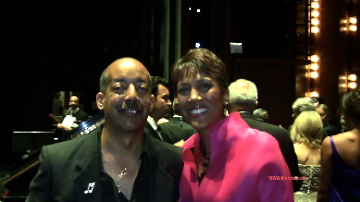 For the record, today’s daily thought has nothing to do with those younger women who like “variety.” They have every right to change hair colors, makeup and even hair styles to differentiate their looks and they will get “no complaint” from me whatsoever. The other day I had a talk with someone in reference to people who get older and decide to “dye” the color of their hair to eliminate or hide greying. I know that from my personal viewpoint I never had a problem with a woman coloring over the natural tone of her hair. However, I have seen some men go through it and wondered if it seemed as natural for us. My barber (yes, I still go to one… thank you) decided to touch my mustache up with hair dye the other day. I had never done this before, so I asked him whether or not I should continue to use it. He said that for my line of work I should and that there was nothing wrong with it. He said that most people who get older in life have an image to maintain and now I am at the stage where I should start considering it.  When I looked at it afterwards I no longer felt like myself, but he did say that it would take some getting used to at first. I spoke to all my close friends (including my family) and asked them to give me their real personal opinion. They said that it wasn’t that noticeable and that I should try it. Well, the jury is still out but I am leaning in that direction. A lot of the big name celebrities that I played for did the “hair dye” thing and I just happened to notice because when you play “behind them” you can often see where the color lines change in the back of their heads (and no, I will not mention their names here). As for women, they can always get away with it and look more natural than most men do. As we all get older we do have options. I have no problem with growing old naturally but I will listen if someone makes a valid suggestion. Each year I ask my daughter if I can still get away with wearing one of those muscle shirts and so far she has said that it still works for me. She will, however, let me know when the summer comes when it is time to start “hiding things.” Life is precious… life if valuable… Life is to be enjoyed at any age. Live your life as though you “feel 20.” You earned that right… Thank you for checking out my Daily Thought, and as always I wish you the very best that life has to offer.

Last week they had predicted that we were going to get a massive snow storm. They were “right…” It began Friday night, and it continued through Saturday until the late night came. Afterwards, we were looking at over “20” inches of snow on the ground. ALL of my gigs were cancelled, and I could do nothing but watch television and work on music. Even today my car is still snowed in, and thank goodness the temperatures will be a little warmer today so that some of the snow will melt. The last time I tried shoveling or raking anything I threw my back out terribly and it continued to hurt me for almost a month afterwards. There was no way I was tackling this amount. While I hated losing money on my cancelled gigs I realized that I probably needed a break anyway. I play a lot and I am on the go a lot, so if snow is the only way for me to rest up then so be it. It was pretty to look at, though. We ALL are susceptible to the ways of nature, and there really isn’t much we can do about it. This was our first major snowfall of the year here and in one day we managed to accumulate what we would normally encounter in an entire winter. I would like to think that this is all we will get. However, I know better than that. Spring for us won’t arrive until at least the latter part of March, so it would be crazy for me to think that no more snow will be coming. I feel rested, and I feel at peace. I can go on with getting back to reality (once I finally get my car out from  the huge amount of now). When I look outside, I realize that “today is a beautiful day after all” and I smile… I hope you awoke and felt the same way as well. Thank you for checking out my Daily Thought, and as always I wish you the very best that life has to offer.

The wintry view from my front door

Thomasina has a professional occupation but she also sings. When we talked to her about doing this photo shoot she was more than eager, and needless to say we are all pleased with the results. For today’s Daily Thought, we would like to present to you, “Thomasina.” 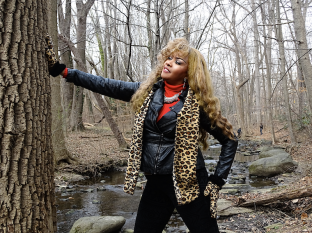 In my opinion, this song is magnificent in so many rights… Lyrically it is powerful, with words that will mesmerize your soul. Musically, it is very well arranged. The symphonic arrangements blend together well and they give the song a real pleasant aura. Paul McCartney’s voice is a perfect complement to this song. The tone of it fits perfectly. If you cannot tell by now, this song is “one of my favorites of all time.” The only issue with this song for me was that it was listed as belonging to the Beatles. However, if you listen to the song, none of the band members are playing on the track because the whole music section was done by an orchestra. There is no guitar, no bass, no keyboards of drums.  That means when performing this song live all the other members of the band may as well have gone offstage to have a seat. Nevertheless this song is a classic and I hope you don’t mind me sharing it with you today. Thank you for checking out my Daily Thought and as always I wish you the very best that life has to offer

brettjollydotcom
Create a free website or blog at WordPress.com.